Department of Public Works and Highways “Lakbay Alalay” team from the Regional and District Engineering Offices deployed to strategic locations along the national highways of the region will provide assistance to the travelling public starting at 7:00 A.M. on October 31, 2018 until 12 noon of November 04, 2018.

During the recent Regional Staff Conference, DPWH Regional Director Ronnel M. Tan made instructions to suspend reblocking or repair of a damaged road section on major highways, roadways and those road section near cemeteries. “Since this will be a long weekend, two way traffic scheme in all roads must be maintained, director tan said.

He added that those District Engineering Offices with on-going Long Term Performance Based Maintenance Projects to properly coordinate with the Project Engineers of both the Unified Project Management Office (UPMO) and concerned contractors for the scheduling of road works. The installation of necessary traffic advisory and directional/informative/warning signs must be visible and properly installed for smooth and safer travel.

The ‘Lakbay Alalay “ team is advised to coordinate with other concerned agencies such as the Land Transportation Office (LTO), Philippine National Police (PNP), and Local Government Unit Officials to ensure proper assistance that may be provided. (dpwh ro1) 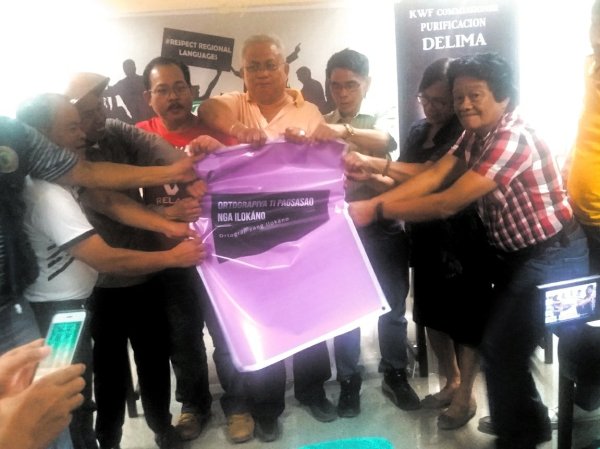 LAOAG CITY, Ilocos Norte – The groups of Ilokano writers, stakeholders on Ilokano language have called for the resignation of the Komisyon ng Wikang Filipino (KWF) Chairperson Virgilio Almario and his commissioner for Ilokano language, Purificacion Delima.

The groups made the move following the launching by the KWF on the proposed “Ortograpiya ti Pagsasao nga Ilokano” in the DepEd Regional Office 1, San Fernando City, La Union on October 18, 2018.

The Gunglo Dagiti Mannurat nga Ilokano iti Filipinas (GUMIL – Filipinas) led other groups of Ilokano writers like the International Committee for the Protection of the Ilokano Language, NAKEM Youth, Nakem Conferences International, the academe in Regions 1, 2, 3 and Cordillera Administrative Region (CAR) in protesting against the KWF’s version of Ilokano orthography.

Vilmer Viloria, the president of the GUMIL-Filipinas, said the KWF’s Ilokano orthography has created confusion among the students, who are learning the Ilokano mother-tongue language.

“While we support the initiative of the KWF to develop the National Language, we take exception to the move of KWF Chairman Almario to compel a regional language like the Ilokano to use the standards set by the Ortograpiyang Pambansa, disregarding in effect the existing and popular/standard Ilokano orthography; KWF is out to destroy the distinct characteristics and identity of the Ilokano language, and eventually the language itself. This is contrary to the mandate of KWF, that is, to further develop, enrich, propagate and preserve Filipino (the National Language) and other Philippine languages,” said Vilmer Viloria, the GUMIL Filipinas President.

“We insist that the present Ilokano orthography has existed for decades, used by most Ilocano writers, and has been the basis for spelling of volumes of publications, such as Bannawag and the Ilocano Bible,” Viloria added.

The Ilokano language has been standardized with the publication and distribution of the Tarabay iti Ortorgrapia ti Pagsasao nga Ilokano (Guide to the Orthography of the Ilokano Language) by the KWF itself in 2012. The KWF 2012 Tarabay was formulated by the commission upon proper consultation with language experts, writers, editors and teachers, using the standards long employed by the writers and editors of Ilokano dictionaries, existing Ilokano magazines and newspapers, and other publications and the basis of the Ilokano form as taught in the University of Hawaii, Manoa and at state universities in the Philippines offering courses in the Ilokano language.

“We steadfastly maintain that changing any established orthography should have been done by consensus of those that are affected by such change,” he added.

KWF only consulted with teachers and school officials of the Department of Education in Ilocano-speaking provinces, because, according to Delima, they are the target users of the KWF Ortograpiyang Ilokano in the teaching of Mother Tongue-Based Multilingual Education (MTB-MLE). Forcing upon our Ilokano children the Tagalog-based orthography in the classroom only gives them spelling rules different from what substantial number of speakers are already acquainted with and from existing printed materials that use the long established orthography, thus sowing confusion in using the language.

“Now, with the foregoing, GUMIL Filipinas, ardently working for all aspects of growth and development of the Ilokano language, its literature, culture and history, request the Department of Education, through its Regional Offices in Region 1, 2 and Cordillera Administrative Region, to stop the adoption of the KWF Ortograpiyang Ilokano and avoid confusion in the teaching of MTB-MLE in the classroom,” Viloria said.

The GUMIL Filipinas also called other stakeholders of the Ilokano language, parents, teachers, writers, researchers and speakers of the language, to support this urgent call of GUMIL Filipinas for the rejection of the Tagalog-based KWF Ortograpiyang Ilokano, and continue the adoption of the 2012 Tarabay in the preparation of learning materials for MTB-MLE for Ilokano language.

Meanwhile, the Leo Tejano, the president of the NAKEM Youth, condemned the Ilokano orthography released by the KWF.

“We protest and reject the imposition of the KWF of its culturally and linguistically inappropriate “Ortograpiyang Ilokano,” the group said.

Aurelio S. Agcaoili, the founder of the International Committee for the Protection of the Ilokano Language and Nakem Conferences International, demanded  the resignation of the Delima from resign from her post as she does not have the expertise to represent the Ilokano people and their language.

“We, the stakeholders of the Ilokano language from the various diasporic communities, hereby offer this statement as our official position on the most recent onslaught of the Commission on the Filipino Language through its chair, Virgilio Almario, and its Ilokano commissioner, Purificacion Delima, of the integrity of the Ilokano language by their mindless and authoritarian imposition of their own brand of “Ortograpiyang Ilokano” that is patterned after its imposed “Ortograpiyang Pambansa,” said Agcoili. (PR)

After typhoon Ompong hit Ilocos Region last month, the Overseas Worker Welfare Administration Regional Welfare Office I (OWWA RWOI) has given Calamity Assistance to OFW – OWWA members and their qualified dependents who were severely affected by the typhoon.

OWWA, through its Welfare Assistance Program (WAP), gave assistance amounting to Php 3,000 for active OWWA members and 1,500 for inactive members.

Since the whole region was stated under state of calamity during the typhoon, OWWA RWOI together with the local government of each provinces has to identify the top municipalities and cities that were hardly hit by the typhoon thus giving priority with the calamity assistance.

In Ilocos Norte, the processing for the calamity assistance was held last September 25-28 and October 4-6 in Ilocos Norte Capitol Cafeteria. OFW-members and qualified dependents who were residents of Batac City, Currimao and Pagudpud were able to claim their benefit.

On the other hand, the schedule for calamity assistance in Candon City, Ilocos Sur was last October 17-18, 2018 while Vigan City was October 19-20, 2018. It was held on Candon City Hall and Ilocos Sur Capitol, respectively.

October 27, 2018 0
CAMP BGEN OSCAR M FLORENDO–The conferment of the 2018 Ten (10)
Outstanding Policemen in the Province of La Union (TOPPLU Award ) was held at the
Diego Silang Hall, Provincial Capitol, City of San Fernando, La Union on October 11 ,
2018 graced by the Provincial Governor, Hon Francisco Emmanuel “Pacoy” Ortega III
The awardees for this year as “Outstanding Policemen” in a provincewide
search initiated by the Provincial Government of La Union were: Police Superintendent
Richmond Tadina adjudged as Outstanding Police Officer in the field of Administrative
Management; PO3 Bryan D Pascua for Special Operations Category; Police Chief
Inspector Bedalyn Antonio for Criminalistics; PO2 Glenn Almonte in the field of Anti-
Narcotics ; Police Chief Inspector Fermin Farro in the field of Investigation; Senior Police
Officer 2 Marvin Marquez for Human Resource Development; Police Senior Inspector
Reginaldo Dalipias in the field of Intelligence; Police Officer 2 Zenaida Claro for Police
Community Relations and Police Inspector Rosemarie Rafanan for Medical Category.
The TOPPLU Award was envisioned by the Provincial Government of La Union
to recognize efforts and accomplishments of policemen in the province who contributed
immensely in preventing and solving crimes and in maintaining peace, order and security in the province with the support of the community. The search was initiated by the Provincial Government of La Union as a way of expressing their deep appreciation of the La Union PPO personnel’s commitment in maintaining peace and order in La Union.
Police Senior Superintendent Herminio Tadeo, PRO1 Officer In-Charge, was
represented by PSSupt Flynn E Dongbo, Regional Chief Directorial Staff, PRO1 and
PSSupt Ricardo B Layug,Provincial Director of La Union Police Provincial Office were
present and expressed their gratitude to the Provincial Government of La Union for
giving recognition to the police officers who displayed exemplary performance in the
different fields. They both congratulated the awardees for a well-deserved recognition
however, the awardees were challenged that the award they received should spur them
more to work even harder and push them to go the extra mile for better service. (pnp-pro1)
October 16, 2018 0 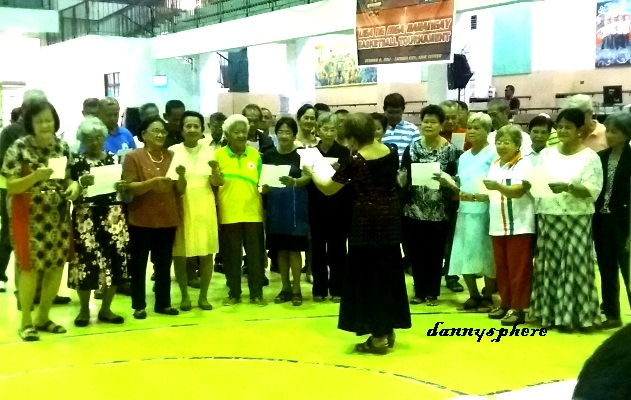 Who said senior citizens are not tough. While the children didn’t went to school because of typhoon, these guys are brave enough to push through the Senior Citizen celebration in Candon City.

So what if typhoon Odette is harassing the place with the storm warning signals number 1 in the morning. The rain can be remedy by raincoat or umbrella; and there was no strong wind. There are floods in some area but not to the Candon Civic Center—the venue of the event.

END_OF_DOCUMENT_TOKEN_TO_BE_REPLACED

Ilocos Sur. For the first time the whole galaxy was brought to Candon City.

The DOST Region 1 through the leadership of Director Armando Ganal spearheaded the program together with other sectors from universities/colleges, national agencies linked to DOST like the PAG-ASA and Philvocs, and other private sectors and companies.

END_OF_DOCUMENT_TOKEN_TO_BE_REPLACED

The Civil Service Commission of Region 1 held the Regional Recognition And Awards Rite to individuals and groups from government sector who excelled and put the public service service to the next level when in the awarding ceremony held at Diego Silang hall of provincial capitol of La Union.